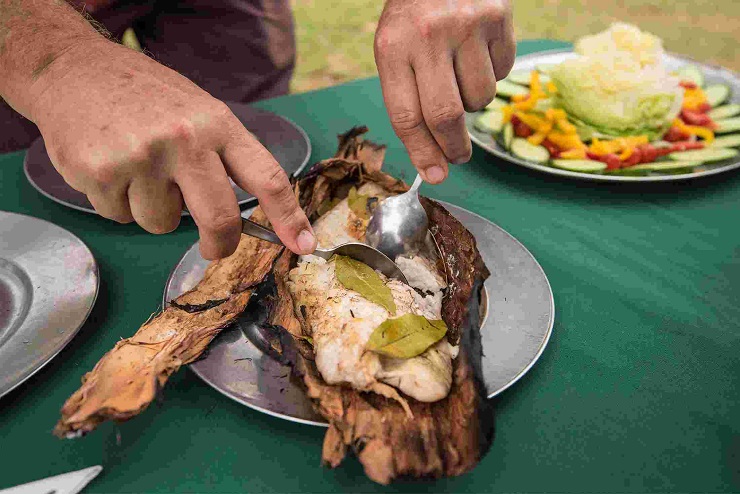 Northern Africa is comprised of several countries, namely Algeria, Morocco, Tunisia, Mauritania, Libya and Egypt. Clearly its foods have been influenced over the centuries by the ancient Phoenicians (a Semitic civilization now modern-day Tunisia) who introduced sausages and wheat, and Berber nomads who adapted the semolina from wheat, creating couscous which has become a main staple. Fast forward a few centuries, and you have the Arabs bringing a variety of savory spices, like cinnamon, ginger, nutmeg, cloves and saffron. From the New World, chilies, tomatoes and potatoes appeared, with lamb as a primary meat. (For you old movie buffs, Casablanca is Morocco’s chief port and the location where Humphrey Bogart’s character owned a bar.) These very foreign and strange-sounding foods make up a majority of dishes and regional cuisine:

Chermoula: a mixture of herbs, oil, lemon juice, pickled lemons, garlic, cumin, and salt, used as a marinade and relish;

Couscous: popular in many countries (including the U.S.) as a rice and potato substitute, made from steamed and dried durum wheat;

B’stilla: also known as pastilla, is Moroccan in origin, dating back to the eighth century; generally a sweet and sour pigeon pie, or made with chicken or quail. onions and spices like saffron and coriander, almonds and beaten eggs, wrapped up in thin warqa pastry that becomes crispy when cooked; (a main course and dessert all-in-one)

Tajine: a famous Berber dish, named for the pot in which it is cooked; your basic slow-cooked stew with meat, veggies, spices and dried fruit;

Shakshouka: a Tunisian dish, sometimes called chakchouka, also enjoyed in Israel and believed to have originated with Maghrebi Jews; served at any meal, containing chopped onions, chili peppers, tomatoes and cumin, until it has formed a thick sauce,topped with poached eggs;

Ful Medame: the national dish of Egypt and a popular street food in Cairo and Giza,containing cooked fava beans, then served with vegetable oil and cumin, garlic, onions, peppers and hard boiled eggs, dating back to Egypt in the fourth century;

L’hamd Marakad: the pickled lemon, an essential ingredient in Moroccan cooking, one the main ingredients in salads and plates of vegetables or flavored chicken dishes; fermented with lemon juice and salt for a month;

M’hanncha: sometimes known as the ‘Moroccan snake’ cake, (mercifully not made with actual snake) It derives its name from filo dough filled with a sweet almond paste, rolled and flavored with orange water and cinnamon, then cooked;

Harira: a soup always eaten during the Holy Month of Ramadan, when a fast is broken at sunset, usually a snack or appetizer;

Matbucha: another small dish, native to Israel, Syria and North Africa, your basic cooked tomatoes and peppers, spiced up and served with bread and olives; surprisingly, tomatoes did not arrive until the early nineteenth century, brought by the British Consul in Aleppo;

Mhadjeb: also called mahjouba, is a staple of Algerian cooking and a common street food, sometimes called Algerian crepes, filled with a paste of tomatoes and chopped cooked vegetables; if you utter “take me to the Casbah” you are likely to encounter these crepes, and who knows what else, so it’s best not to kid around;

Mechoui: the traditional North African meat, a whole lamb roasted on a spit or in a pit, served with flatbreads, dips, and yogurt;

Mrouzia: a dish traditionally served during the Eid al-Adha festival in Morocco. a very specific type of tajine made with lamb;

Authentic Northern African restaurants are pretty scarce, especially outside of major cities, but well worth the adventure should you be lucky enough to find one. Expanding our knowledge of different cuisines may be out of our comfort level but certainly worth a try. So if you have the opportunity, take advantage. And if you are an avid multi-cultural cook, you can order many African food products online.