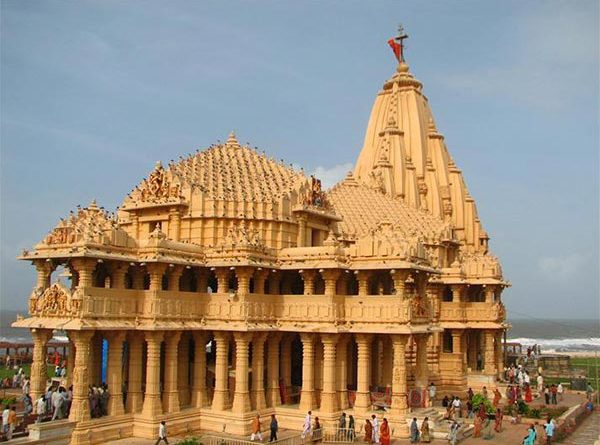 Somnath means “Lord of the moon”. This sacred destination was initially known as “Prabhas Patan”. The city is unaffected by the modernized luxuries and, still holds its mythological, historical and pious appeal to the masses of Hindu followers. The land has been favorite choice of numerous tourists universally as it is one of the 12 Jyotirlingas. Owing to the variety, India has to offer in terms of topography, climate, cuisine, architecture and art and culture, this place deserves a visit or two. The location is gratified with variety of religious monument and temples. The travel and tour facility is also available to roam in and around the city.

Somnath is the name of the moon which once disregarded certain sayings of his father in law Daksha. As a result, Daksha cursed Soma for his misleading. With this the moon started to shrink in the sea however; many appealed to him about asking him to take back his curse. Finally, Daksha asked Soma to bathe in the river Saraswati then, pray Lord Shiva for his penace. Hence; Lord Shiva was pleased & restored his moonlight.

Somnath pilgrimage stands at the sea-shore of Arabian Sea on the western corner of Indian sub-continent in Gujarat. The destination has ideal geographical surroundings and is blessed with greenery on all sides.

Somnath climate is pleasant and temperate all year round. During monsoons, the place’s ambience becomes humid and cool. Summer day’s temperature is usually around 24 C and in winter’s temperature normally ranges from 10 to 23 C.

Somanth, culturally is the rich land with traditional philosophy to boast. Traditions and culture here are full of color and music and hence attracting mass of domestic and foreign travelers. The dynamic, vibrant lifestyle of the native inhabitants of this place reflects several religious and soci-cultural festivities which are celebrated with great passion and enthusiasm. Locals of this place are very religious and follow their culture vibrantly. The natives are friendly and jovial.

Transportation by air, bus and train

Somnath has the closest airport Diu which is 90 kms from the city. The airport is well-connected with other metro cities of India. Veraval in Konkan line is the nearby junction which is just 5 kms connecting to other cities of India. Frequent trains are found to reach this place. State transport buses and other private transportation connect this place to other cities.

Somnath to experience at its best should be visited from October to March as, there are number of festivals and cultural activities taking place and also this time the climate is favorable for sight-seeing.

Tourist Attractions and Places to visit

This is amongst many important pilgrimage and primary highlight of Somnath as known around the world. The magnificent architectural beauty makes the most fascinating place amongst other Somnath tourist attractions. The fifty meter high tower adorned with holy images and idols is renowned for its intricate carvings.

The Museum of this place is renowned for its traditional collection of artifacts which highlights the golden era of this temple which makes it a must see amongst many Somnath tourist attractions.

It is indeed a fabulous breath-taking not to miss during temple visit. The show attracts lots of crowd and is known to be the most amazing show amongst Somnath visiting places.

It is another prime tourist spots amongst many Somnath visiting places. This is the place where Shri Krishna was wounded before his death.

It all started as a casual suggestion to give writing a try from a friend, but then somewhere down the line she realized that being involved in writing is too good to pass. To gather every tit bit of information and to pour it in a decent form is the essence of her present work being.